Born into a conservative and traditional Pueblo community of San Felipe Pueblo which is situated by the side of the Rio Grande River in New Mexico, Richard Chavez began his professional life working as an architectural draftsman, he attended the University of New Mexico’s School of Architecture, but to help pay his way and supplement his income he began making jewellery in his spare time. Among the types of jewellery he learn’t to make were heishi and turquoise necklaces from his grandfather, he then began teaching himself silverwork.  He then began working minimalist architectural philosophy into his jewellery designs.  Eventually he left his career in architecture to work as a jewellery designer full time. Richard Chavez jewellery designs have won many awards since he entered his first competition in 1976 and he has earned recognition due to the high standards of his jewellery, but stopped entering judged competitions in 1990.

From start to finish each piece of Richard Chavez jewellery goes through many steps, beginning with a sketch to decide on the design then he solders, sands, cuts and then polishes his work before finishing the lapidary process. He completes each step by himself from the purchase of the raw stones to cutting and grinding them into shape and polishing them before setting them into gold or silver. With each stone going through a process of at least ten steps before being ready for the final polish and setting.
Exhibited -American Jewellery from NewMexico
” Albuquerque Museum “June 2-14 Oct  2018
Richard has just had one a man retrospective
“Symmetry in Stone” The Jewelry of Richard I Chavez
The Heard Museum “Phoenix”-Feb 02 to 5th Aug 2018 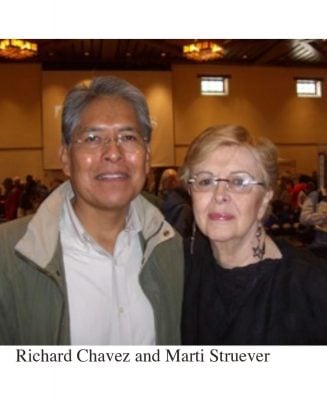