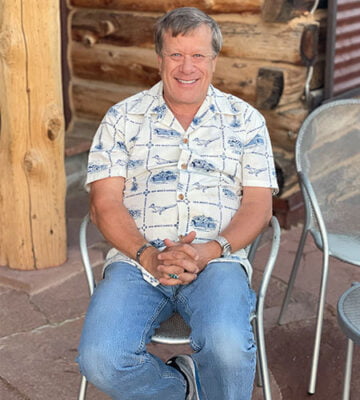 Location -Near the train depot on Guadalupe Street. Across the tracks from the Santa Fe Farmers Market

Silver Plume is a very small, old, rural mining town dating from the Colorado gold and silver rush of the last four decades of the 19th century. In 1859 gold was discovered at the confluence of Clear Creek and the Platte River near what is now Denver. Inspired by the 1849 California gold rush and by Horace Greeley’s immortal if misguided promotional admonition to “Go west, young man, go west,” literally thousands of fortune-seekers headed up Clear Creek into the Rocky Mountains, seeking the plume’s (veins) of ore that were the source of the nuggets and dust found in the waters of the Creek.

Tad’s mother Joan, loved to take the family to Silver Plume for holidays during the 1970’s. It was these happy childhood memories, together with utilizing George Anderman’s (Tads father) business logo which graced the family business for 27 years until his passing, which inspired Tad to continue his families traditions. Silver Plume Trading was born 1990 and moved to Sydney 2011- 2017.
Tad is currently living in Texas