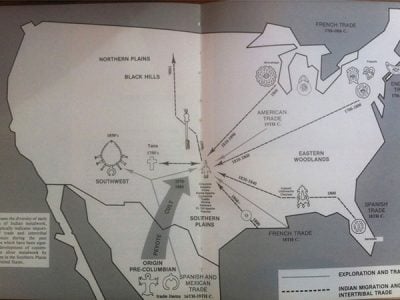 Important stylistic influences in the art of southern Plains Indian metalwork in German Silver, has been the growth and development of the Peyote Cult and the subsequent organization of the Native American Church. The use of peyote for medicinal and ceremonial purposes is thought to have originated in pre-Columbian times among Mexican Indigenous tribes. These peoples migrated north to the Apaches.   During the last three decades of the 19th century its use reached Caddo, Comanche and Kiowa Indians, and through these tribes was dispersed to the central and northern plains.

In relation to the Southern Plains Indian German Silver metal work, the peyote cult brought about the development of unique designs representing the iconography of the Native American Church. The most important in church symbolism is the aquatic spirit bird (Cormorant) who is entrusted with the prayers of worshipers. This spirit bird is the most common religious symbol found in peyote jewelry and is usually depicted with neck and wings extended as if in flight. The tail feathers often consist of several separately attached, dangly fringes.